It was around 2017 when I bought a new laptop and switched to Linux. I started off with Ubuntu (but jumped to Elementary later), as most people suggested it was beginner friendly. People suggested getting used to the keyboard and terminal over the mouse to enjoy the ultimate power of Linux. Since then I started learning terminal commands and keyboard shortcuts. The fact that I know fast typing (learned from Typewriting institute) was a cherry on the cake.

2 of the most predominantly used commands in Linux are cd and ls.

The former command (cd) is used to navigate to a path or a different folder in the terminal. The latter command (ls) is used to list all the files and folders in a directory.

I’ll walk you through a few of my experiences handling file and folder operations in Linux.

I love downloading and readings files and books from the internet. But, earlier I had a bad habit of downloading all the files into the Downloads folder.

One day I was in a hurry to search for a document. But opening and searching through the long list of files in Downloads the folder was much frustrating for me as it has 1000+ files.

I wished to find a shortcut way to identify the file. The only clue I had was it was a PDF document. So, I planned to copy all the PDF files to another temporary folder.

#1 How to copy only the PDF files from one folder to another?

cp is the command to copy the files. Thankfully Linux terminal supports regex almost everywhere. So, my work becomes so simple. Here’s the code to copy the pdf files into another folder.

mkdir command is used to create a new directory. Regex stands for Regular Expression, which is used to filter items by matching patterns. In our case, it’s the files ending with .pdf extension

There were less than 50 PDF files. I was able to find the file in a couple of minutes.

This is the continuation of the above step. Once I found the file I wanted it to be renamed so that I can find the file quickly in the future.

I searched for the same on the internet but then I found that the file has to be renamed with the move ( mv ) command.

#3 How to delete a folder completely? (including its files and sub-folders)

I copied the renamed file to a safe remember able to place. I don’t want the temporarily created folder and all the files inside it.

This can be achieved with rm -rf command.

But, it’s a dangerous command. It won’t ask for any confirmation before deleting the folder. Recovering a folder deleted with this command is almost impossible.

It was a bright morning day, and my online class was already started and I was delayed by 2 minutes. I want to start taking notes, but I found that I kept my notebook and pen somewhere last night and couldn’t remember exactly. The very next thing that strikes on my mind was to open Google Docs. But, that site will take some time to load.

Why don’t we create a text file and start taking notes?

was the question that hit my mind next. I remember one of my friends told me once that the touch command can be used to create a file instantly. But, I hadn’t given that a try yet.

This command creates a file and does not open this file in edit mode to start taking notes. This is where you can use your favorite text editor to open your file.

vim and nano are the 2 well-known text editors available in Linux.

I ran nano notes.txt which opens up the text file in edit mode. I took all the notes.

Finally, I reached the end of the session, but I don’t know to save the file. I don’t dare to try any commands before taking a backup of the notes. So, I picked up my mobile and took a snap of my notes. On a quick Google search, I found that it was “CTRL + X” to save the file (which will prompt Yes / No to save the file, hitting “Y” and pressing “Enter” will save the file).

After saving the file, I was curious to check if I have saved the file correctly.

#2 How can I read the contents of a file?

Have a look at the output of head and tail commands

#3 How can I read the contents of a file with line numbers?

One day, one of my colleagues asked me,

Hey! Do you know how to display the contents of a file with their line numbers in the terminal?

“I haven’t come across any such commands explicitly available for this. We may write a script that reads the file line by line, and prints them on the console by pre-pending line numbers for each line”, I replied.

We both started to solve that. Interestingly in the middle, we found a straightforward command for the same.

Yes. The command is nl.

There are a lot of file utility commands available in Linux which most people are unaware of. During our development time, we come across multiple scenarios about handling files. Quickly summarizing a few of my discussions with my colleagues here.

#1 Do you know a command to find the properties of a file?

Yes. stat command displays the properties of the file such as name, size, permissions, created by the user, created and updated date and time, etc.

#2 Is there a command to find the number of words in a file?

This was the question from Udhaya.

The answer is Yes. Not just words, we can also count lines and bytes too using the wc command.

Few weeks back, I encountered an extraordinary question from Kumar,

#3 Can we find the type of the document with a command?

To answer his question, here’s the proof showing the type as PDF document before and after removing the extension from the file name.

#4 How can I find the occurrences of a word in a file?

grep stands for Global search for Regular Expression and Print out

#5 What if I want to find all the lines that does not contain a particular word? 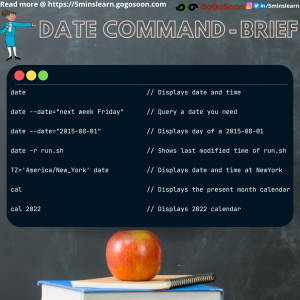 How to query the terminal to find a date – Date command

Tech Lead @ GoGoSoon
Curious to deep dive into any technology